* In case of any delay in receiving the OTP, you may verify it later. Please proceed without verification.

Enter your City name or Pincode

Kondagaon is a district headquarters and municipality of Kondagaon district of Chattisgarh. On Independence Day of 2011, the chief minister of the state announced the formation of 9 revenue districts out of which one was Kondagaon. Kondagaon district was separated from Bastar district on 24 January 2012. It was one of the 27th district of Chhattisgarh state. Not more in number still there are few tourist spots in this city of Chhattisgarh. Famous Shiv temple is located at a distance of 4.5kms near Narangi river. A number of tourists and devotees visit the temple regularly to pay homage to the main deity. Dr.Jaidev Baghel Shilpgram is a best place to have a look of the handicraft of the region. 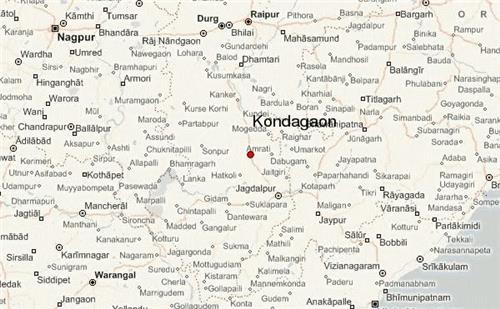 It is believed that Kondagaon was once known by the name of Kondanagar. An old story is that is associated with the town states that once Maraar people while crossing the town, when came near to a place near present day Gandhi chowk, there vehicle got struck in the climbers of Kanda tree. They decided to spent night there. At night the chief of the group had a dream. In the dream goddess asked him to settle in this town. This place then based on the climbers of tree Kanda came to be known as Kandanagar, which was later replaced by Kondanagar. With passage of time people of the town decided to replace the name Kondanagar with Kondagaon.

The economy of the town depends on its handicraft. These handicraft items have a demand worldwide and thus create a lot of employment opportunities for the people of Kondagaon. Kondagaon is also famous for its timber mills. There are a number of timber mills like Ajanta saw mill, Mahesh Traders, radhe traders etc. 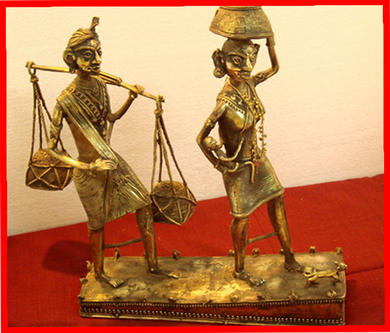 Kondagaon is famous for its various art and handicraft items. The city is also known as the city of sculptures. Kondagaon also manufactures various handicrafts sold worldwide under the name of Bastar Handicrafts. Nandi Bull and Jhitku mitaki are among famous sculptures from the town. You can buy number of artifacts while shopping in Kondagaon. Some of the very famous handicraft items from the town are mentioned below.

Iron Metal Sculptures : Iron was initially used for making tools for hunting and then the use of this metal increased extensively. Kondagaon is famous for various statues made out of this very metal.

Bell Metal : The bell metal art of the town is very famous. Panchuram, Mr. Sushil Sakhuja, Suresh Baghmare and Sukchand are the well-known bell metal artist from the area. According to the sayings long back a man witnessed a shiny material has come out of the cracks that were formed by the fire that has spread over an uphill in the dried woods. This shiny material has solidified. The solidification of molten metal has taken up unique shapes. Out of the curiosity man took that material home, this in turn attracted a number of people who came to his home and saw the shiny stuff. The demand for this increased and gradually a new art form known as Bell metal sculptures came into existence.

Local Art : People of Kondagaon have their special art form. They made designs of Raddle on the walls of the houses and of rice flour on the floor. They use special symbols to depict different occasions. On a very special occasion of Lakshi Jagaar a festival celebrated with great enthusiasm in kondagaon, people draw the characters from the famous literature on the walls. For this they draw images with white powder of rice flour over the base of raddle.

Goncha Festival: People of Kondagaon celebrates Goncha festival with great enthusiasm and joy. The tribes of the area take equal participation.Festival is a very famous festival of Kondagaon which is celebrated during the occasion of Rath Yatra. It is popularly known as the Chariot Festival and is celebrated in July according to the Gregorian calendar. The name ‘Goncha’ is the name of a fruit. A pistol is made by using tukki or bamboo. The tradition of using the weapon is considered as a mock weapon and the fruit as a bullet.

Madai Festival : The presiding deity is worshiped during the festival. A procession is carried out to open the festival. A large number of devotees and general tourists joins the festivals.Madai festivals keeps moving from one city to another. The priest starts worshiping the goddess in the end of the festival. The festival is marked with several cultural events like folk dance, drama, songs etc. Kondagaon welcome Madai Festival in the month of March when it comes to its final end.


Kondagaon at a glance

Comments / Discussion Board - About Kondagaon